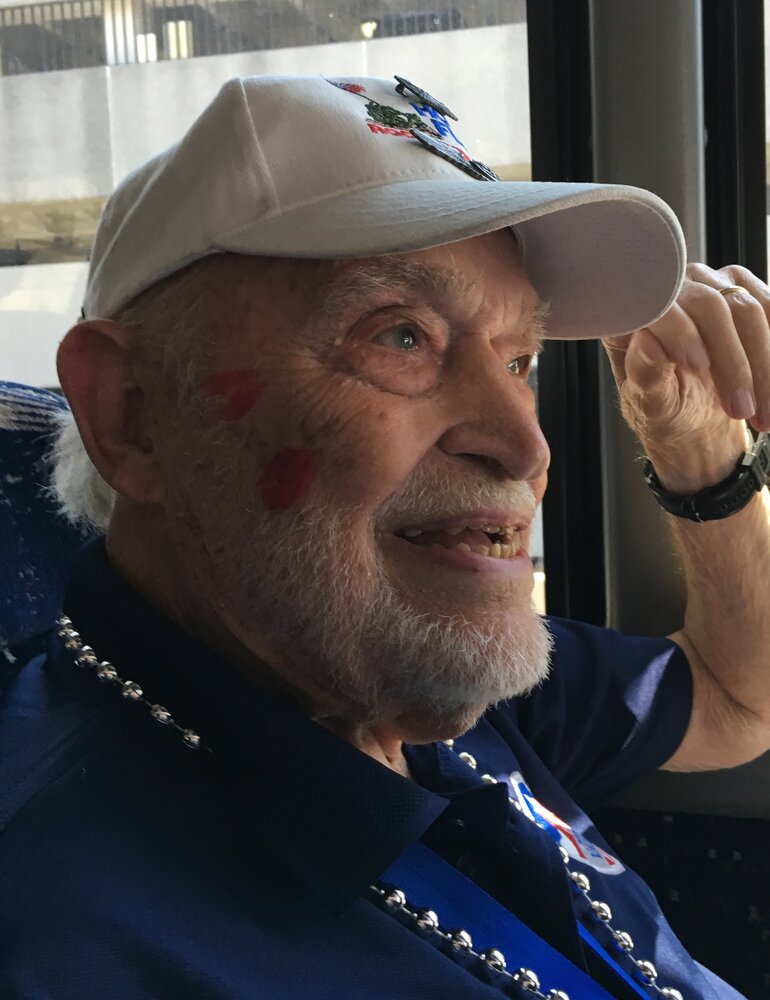 Please share a memory of Theodore to include in a keepsake book for family and friends.
View Tribute Book

Less that two months from his 100th birthday, Theodore Joseph “Ted” Ellstrom passed away at Strong Hospital in Rochester, NY, in the early morning of August 9, 2022, with loving family at his side.  Ted was was born in Altoona, Pennsylvania, on October 4, 1922 to Joseph and Mary Ellstrom.  He grew up in Altoona, and shortly after graduating from high school, he joined the U.S. Army Reserves so he could play clarinet and saxophone in an Army band.

On the bus taking him to be discharged in 1941, Ted heard the announcement of the bombing of Pearl Harbor and knew his time in the service was not over.  He became part of the Army Air Corps and was on a crew that flew gasoline from India over the Himalayas to China.  Flying 59 missions, Ted was part of the China Burma India group, flying what was referred to in Air Corps lore as the “Hump.”  In the last few years, he was honored by participating in the Honor Flight to D.C. with other veterans and the Gary Sinise-created Soaring Valor trip to New Orleans to visit the World War Two Museum.  The museum people were so impressed by Ted’s knowledge of the CBI, that they came to Webster to film and interview with him for their archives.

Discharged in 1945, Ted moved to Penfield, NY, where he met his future wife Dawn Willink.  Married in 1946, Ted and Dawn moved in 1953 to Webster, NY, where they made their permanent home.  He graduated from the University of Rochester in 1952 and began a nearly 30 year career with the Rochester Telephone Company.  Ted and Dawn had five children, Gregory (Linda), Timothy, Heidi (Thomas) Zastowny, Becky (Peter) Sollame and Polly, who all adored their father.

Ted was a beloved man, and not just by his children, eight grandchildren, thirteen great-grandchildren, grandsons-in-law and granddaughters-in-law, nieces and nephews, but by so many people that he met over the years.  When Ted’s children were children, he was the go-to father of the neighborhood, providing help with sports, and projects, and problems to any kid that came seeking help.  Seventy years after the fact, the now grown up kids of Pineview Drive still remember and love him, as do the youth baseball players he coached, and the kids he worked with through the United Church of Christ in Webster of which he and Dawn had been early members.  He was also a pal, an advisor, a golf buddy, a purveyor of corny jokes to truly hundreds of people of his age.

He was also something of a “renaissance man.”  He was a painter in oils, watercolors, and acrylic.  He sketched.  He was a carpenter and craftsman.  He was a woodcarver who produced many realistic birds.  He was a diarist, and in his nineties, did a series of talks on his World War II experiences. And he always loved his music, be it clarinet, and saxophone, or guitar which he took up later in life.  And to sing!  Ted loved to sing.  In the church choir and almost anywhere he might be.

Ted was predeceased by his wife Dawn and his son Tim, both of whom he missed terribly.  The one joy of his passing is that he is now reunited with them.  Ted had a favorite song which he sang often and at many locations, in particular, at the weddings of his grandchildren.  He believed the message of the song he sang, “It’s A Wonderful World.”  At his memorial service at the United Church of Christ on October 8, 2022, you can be sure that someone who loves him will be singing Ted’s song.

The aforementioned memorial will be at 11 A.M., and the church’s address is 570 Klem Road, Webster, NY, 14580.  Please make memorial donations to the church.

Share Your Memory of
Theodore
Upload Your Memory View All Memories
Be the first to upload a memory!
Share A Memory