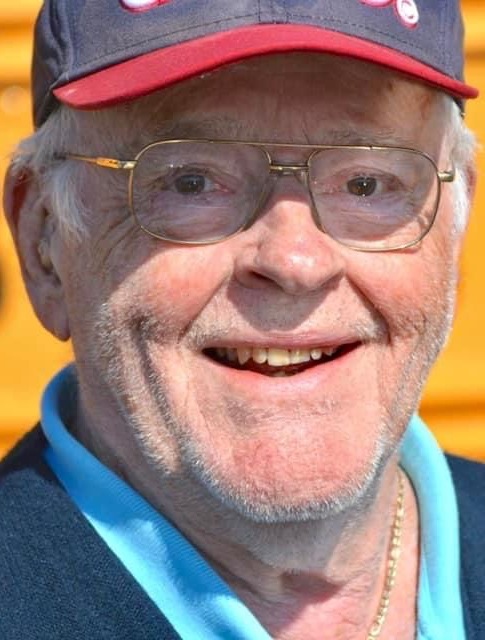 Lee was a larger than life figure in Webster, NY, and touched so many as a cherished friend, husband, father, mentor and storyteller. He was an uncompromising dog-lover and always carried a #2 pencil to record his observations of the human condition.

He was a graduate of Miami University in Oxford, Ohio, where he became less of an academic and more of a fixture as a collegiate sports announcer and writer. It was at Miami where he met his beautiful wife, Barbara. Lee’s early career was with General Electric in Schenectady, NY. Like his father, Lee wrote advertising copy, spending his lunchtimes with colleague Kurt Vonnegut. The two were known to be quirky and humorous, and much before their time. Eventually, he and Barbara married where she pursued her music and modeling career, and he became an advertising executive at Hutchins-Darcy in Rochester.

Lee knew that his ultimate calling was in teaching and being a strong believer in following his passion, he taught the bulk of his 30 -year teaching career in room 209 at R.L. Thomas High School. Through his subjects of multi-media and literature, Lee creatively modeled to his students how the twists and turns of life could be captured through the spoken word and through visual representation. He took great pride in all his “kids”, including those he taught after retirement at the Webster Senior Center. His desire for mentoring and rewarding others for their achievements was vast and lifelong.

Lee was a man of great observation and detail, knowing every exit toll on the NYS Thruway, what his students wore and where they sat in his classroom. In more recent years, he could tell you the many forms of chocolate and indulged as such on a daily basis at Wegmans. Dad shared his love for baseball with anyone who would listen, hosting regular neighborhood games for the kids in his backyard. Even as a child, he diligently tracked all the achievements of major league baseball players and World Series statistics.

Lee understood how critical it was to acknowledge individuality and nurtured the expression of this with his four daughters. He worked tirelessly to support them in their own involvement in the arts and athletic activities, and gave up his office space to build an elaborate darkroom for the photographer in the family. Lee also loved to work with his hands, and created bookshelves, counters and fireplaces for the family home on Apple Orchard Lane. To balance his support for his family with his own pursuits was at times difficult but he persisted nonetheless. He found time to volunteer through the years; he and Barbara restored an old firehouse that was to become a teen center. At holiday time, they even visited Katy’s classroom, playing Lee the Elf and Mrs. Brown, from the North Pole Bakery. Lee readily adopted Barbara’s career in music and theater and both enjoyed participating in the rich culture of the performing arts.

To remember Lee is to remember his great sense of humor. As a columnist, his writing was shrouded in metaphors, personification and pointing out the obvious. He was an engaging storyteller and embraced the human experience.

Recently, he claimed he was in extra innings and the crowd was leaving. In reality, at this last turn at bat, he knocked it out of the park.

A Celebration of Life will be held 2:00 PM Sunday, November 6, at Episcopal Church of the Good Shepherd, 1130 Webster Rd., Webster. For those who cannot make it in person but would like to join via livestream, the link is vimeo.com/event/377724 . In lieu of flowers, donations can be made to: Animal Friends Humane Society, 1820 Princeton Rd. Hamilton, Ohio.