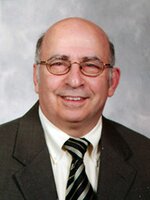 John grew up in Fulton, NY where he was known for his outgoing personality and ability as a wrestler. He was recruited to wrestle at South Dakota State University. During his freshman year in college, he encountered Jesus and the trajectory of his life was altered forever. John left his wrestling ambitions behind and decided to study the Bible at Piedmont Bible College in Winston Salem, NC. While he was there, he met and eventually married his wife.

After graduating from Bible college, John accepted a pastoral call to Calvary Baptist Church in Hummels Wharf, PA. He spent 20 years pastoring the church and ministering to people in the community. In 1987, John and his family moved to Rochester, NY where he would take on the pastorate of Heritage Baptist Church in Penfield, NY. Shortly thereafter, he began teaching at Webster Christian School. It was the role of teacher and coach that brought him the most joy. He spent over 30 years teaching students, most recently at The Charles Finney School, as well as helping people through his counseling practice. He impacted countless lives through his investment in those areas.

John was known as an engaging presence with a joy for life. When he wasn’t talking to others about his “favorite book” (the Bible), he could be found playing drums, gardening, laughing around meals, reading, hunting or simply sitting in front of his wood stove.