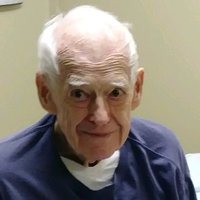 Webster: Wednesday, May 20, 2020, age 91. He was predeceased by his wife Eileen, and his brother John Conolly. He is survived by his children, Jim, Kathy, Tom, Steve, Mike, Peggy, and respective spouses, eight grandchildren, five great grandchildren, brothers Bill (Jean) and Paul (Ann Marie) Conolly. After having lost his best friend/wife of 67 years, Jim declined rapidly. He will be remembered for his quick wit, uproarious laughter, and his insatiable desire to draw you into his exemplary genealogy research. Easily misunderstood, he was a complicated man with many interests, talents, and attributes. Though it was hard for him to say, he was proud of his kids and grandkids and relished in their expressions of individuality. This last year was made bearable and very comfortable with the never-ending T.L.C. given to him by his loving daughter-in-law Zhanna. The family would like to say thank you to Jacque who was hired as an aide but insisted instead, on being a very special and final friend.